Axl Rose's decade-in-the-making opus is finally set to arrive via an exclusive deal with Best Buy? 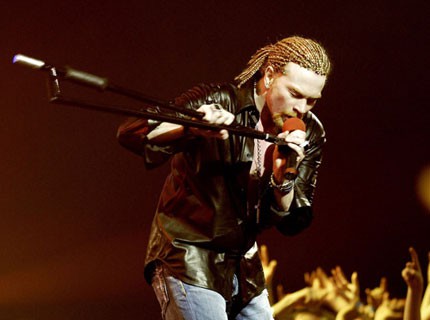 It appears Dr. Pepper’s bet has paid off! Wait no more fans: Guns N’ Roses’ much-anticipated set Chinese Democracy (read Chuck Klosterman’s joke review!) will arrive soon, as Billboard.com reports that reclusive frontman Axl Rose has inked a deal to exclusively distribute the album via Best Buy. An official release date has yet to be announced, but reports state the record will tentatively drop before year’s end.

The album, Rose’s multi-million dollar opus, which saw every original band member depart since its beginnings in the mid-’90s, is the latest set to see exclusive distribution via a superstore chain. And the format has the numbers to prove its success: The Eagles’ Long Road Out of Eden, released in the same fashion through Wal-Mart, sold nearly 3.1 million copies, while sets from Garth Brooks and Journey also received the same treatment. Even Smashing Pumpkins released a version of their latest album Zeitgeist via Best Buy, and this fall hard rock legends AC/DC’s follow up to 2000’s Stiff Upper Lip will arrive via Wal-Mart.

Chinese Democracy, which was recently leaked online, resulting in the arrest and charge of a hacker, also saw the early — albeit legal — leak of album track “Shackler’s Revenge” in the video game Rock Band 2.

Smart marketing or blatantly selling out? Sound off in the comment section below.