The Chicago DJ duo kick off the Treasure Island weekend in style with their doctored beats. 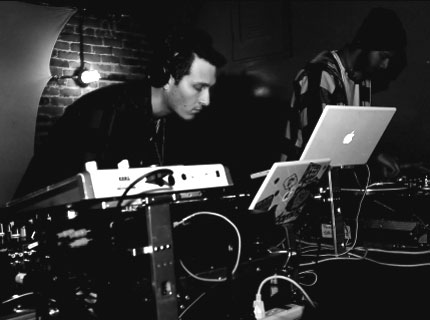 Friday night in the SoMa neighborhood of downtown San Francisco, a disco ball blasted shards of light over a packed house at 330 Ritch during SPIN and MySpace Music’s kick-off party — co-sponsored Boost Mobile and Jack in the Box — welcomingthe Treasure Island Festival weekend with a set from Chicago DJ duo Flosstradamus. After a summer on the festival circuit, Flosstradamus were well rehearsed, delving through their record collection to create a non-stop set, blaring noise over the heads of mingling weekend revelers.

The plaid-clad team took to the tables, bouncing between their Macs and vinyl collections to create the party’s eclectic soundtrack. Mixing bits of Daft Punk and Matt and Kim with beats cut from mainstream idols like the Cardigans, Prince, and Al Green, the DJs kept partygoers stomping and shaking to their sonic collages, with the occasional break dancer busting moves on the floor.

With ’90s hits like TLC’s “Creep” and Next’s “Too Close” in heavy rotation, the energy level didn’t diminished. “Don’t act too cool,” said DJ Autobot, a.k.a. Curt Cameruci, as if giving instructions to the crowd to let loose. And the attendees had no trouble abiding, boogying down without delay in their Treasure Island weekend kick-off of tonal debauchery.

Check out pictures from the party on page 2.


Men Without Hats reminds these partygoers that they can dance if they want to. / Photo by Muhammad Asranur


The Men Behind the Music: Flosstradamus / Photo by Muhammad Asranur

Robin Bacior
Tags: Flosstradamus, We Were There

Josh Young (J2K) Has Left Flosstradamus, But Curt Cameruci (Autobot) Will Continue on His Own