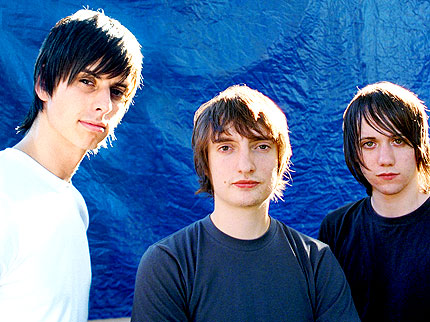 Tom Clarke is bleeding, but he couldn’t be happier. The Enemy UK’s frontman mangled his hand on his guitar at the band’s first-ever American show, a mid-afternoon slot on a sweltering side stage at Lollapalooza in August. A few hundred watched and a few dozen pogoed — decidedly fewer than the thousands the Enemy UK draw at home — but Clarke considers it a triumph. He wanted bodies moving, and he got some. “I wasn’t going to tolerate anything less,” he says.

For a band lyrically stuck on all things gray and British, the Enemy UK are massively upbeat, no doubt a result of winning the rock lottery: Two years ago, they were bored teens in working-class Coventry, and then in 2007, their debut, We’ll Live and Die in These Towns, hit No. 1 on the U.K. charts, and they scored an opening slot for the Rolling Stones. After a long delay due to legal issues regarding their name (turns out the Enemy is a popular choice here), the album finally got a U.S. release in August.

“I find it slightly mental that we’re in Chicago playing music,” exclaims Clarke, 21. “It’s your dream job. I hate it when you meet bands and they complain. They are the luckiest cunts in the world.”

Clarke counts himself and his bandmates — drummer Liam Watts and bassist Andy Hopkins, both 21 — among those lucky cunts. Their songs are about a city they love but couldn’t wait to leave, complete with visions of pregnant teens and shuttered factories. Poppy arrangements — jangling guitars, soaring strings, delicate piano — and sing-along choruses temper the wistful lyrics. Moments vividly echo the Jam, but Clarke says he hadn’t heard anything by Paul Weller until recently. As for inspirations, he swears by Oasis: “I’ve been playing ‘Wonderwall’ since it was released!” (He would’ve been seven.)

Clarke and his mates care more about penning meaningful tunes (“A band with something to say — rare as rocking-horse shit these days!”) than being fashionable. They’re aiming for timelessness, not transitory cool. “Cool is a very hard thing to define,” says Clarke. “At the minute, I’m definitely not cool. I’m standing in Chicago with the sun beating down, in a leather jacket. I’m fucking sweating.”

— The Enemy UK were such fans of Oasis that they hired producer Owen Morris of Definitely Maybe and (What’s the Story) Morning Glory? fame to work on their early singles.
– Before forming the band, Clarke and Watts worked at rival shops selling TVs, while Hopkins put in a stint at FedEx.

Josh Modell
Tags: the enemy uk, This Is Happening