Did the Manchester popsters deserve the esteemed Mercury award? Decide for yourself! 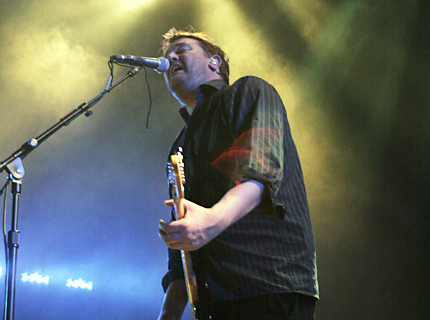 Joining the likes of PJ Harvey, Portishead, Klaxons, and Arctic Monkeys before them, Manchester five-piece Elbow have been awarded the revered Nationwide Mercury Music Prize for their latest album, the SPIN-praised The Seldom Seen Kid.

Beating out a hefty list of competitors, including Radiohead’s In Rainbows, British Sea Power’s Do You Like Rock Music?, and the Last Shadow Puppets’ The Age of the Understatement, Elbow were issued the award — honoring the best in UK and Irish music– last night in a London ceremony. “This is the best thing that’s ever happened to us,” frontman Guy Garvey explained during the acceptance speech, before dedicating the award to the late singer/songwriter Bryan Glancy. “I had a tenner on Radiohead,” he later said of the four-time losers [via NME.com]. “It’s been a long time we’ve been doing it so it’s cause for celebration.” Indeed! And spend that £20,000 wisely lads!

Below, check out the music video for “One Day Like This,” off The Seldom Seen Kid.