Despite a ho-hum new record, these Portland-based psych-rock vets still deliver the undeniable power of the pop hook. 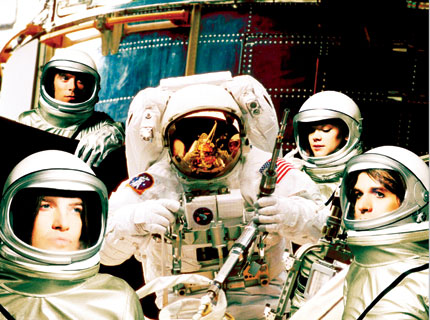 What? Dig!, the debauchery-ridden documentary chronicling the band’s — and their psych-rock contemporaries the Brian Jonestown Massacre’s — trek from gutter to glitz, may have afforded a certain level of celebrity, but let’s face the truth: From their 1995 debut Dandys Rule, OK? to their latest set, …Earth to the Dandy Warhols, this quartet sit atop a cannon that’s a bit spotty. But one thing continues to shine: Dandy Warhols frontman Courtney Taylor-Taylor’s way with winning, Windex-clean psych-pop hooks. “Not If You Were the Last Junkie on Earth”? Check. “Bohemian Like You”? Check.You may have to, ahem, dig for them, but underneath all the messy jams nuggets of genius glimmer.

Who? Formed in the mid-’90s, this Portland, OR-bred band hit the big-time with ironic humor, warbling synths, and psych-pop flower power, eventually landing on Capitol Records’ roster. Touted as the “next big thing,” the Warhols never really broke out commercially — even with a blitzkrieg promotional campaign and plenty of TV/film licensing. Eventually, the band was released from the label during a change in management, but continues, after more than 18 years and nine studio full-length albums, to crank out new material like clockwork.

Fun Fact: After their major label split, the Dandy Warhols took things into their own hands, entering the Odditorium– their Portland, OR, studio that also acts as a live venue and video soundstage — to crank out the self-produced …Earth to the Dandy Warhols, which was eventually released on the band’s own Beat the World record label.