The brothers-in-beats celebrate thirteen years of better living under chemistry with the best-of compilation Brotherhood, out this week. 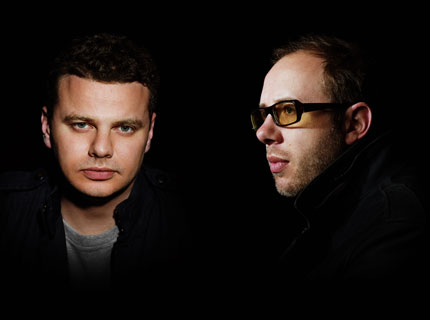 What? As survivors of the heady rise and uneasy comedown of the ’90s electronica craze, Manchester, England’s the Chemical Brothers have been bringing the block rockin’ beats at a consistent rate, from 1997’s landmark rave touchstone Dig Your Own Hole to last year’s spacey We Are the Night.This week, the Brothers look back with the career-spanning Brotherhood, a double-disc compilation featuring the duo’s classic singles, as well as tracks from the hard-to-find Electronic Battle Weapon single series (including new single “Midnight Madness”) and a brand spanking (literally) new cut featuring Baltimore MC Spank Rock, “Keep My Composure”.

Who? Ed Simons and Tom Rowlands began first working together as the Dust Brothers in 1992, but were forced to change their name to the Chemical Brothers in 1995 following threats of legal action from U.S. production team the Dust Brothers.Besides releasing six full-lengths since 1995’s debut Exit Planet Dust, Simons and Rowlands have collaborated with such wide-ranging artists as Q-Tip, the Flaming Lips’ Wayne Coyne, and New Order’s Bernard Sumner.

Fun Fact: A CD copy of the Brothers’ third full-length, Surrender, was buried in a time capsule, compiled in January 2000 by the popular British children’s television show Blue Peter.