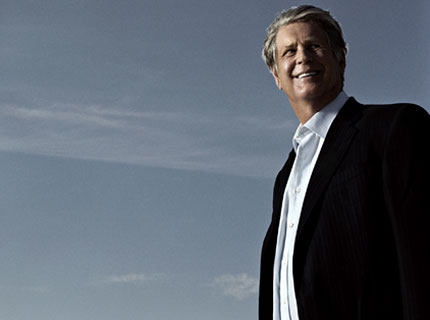 Who? Leading America’s answer to the Beatles’ invasion on stateside pop charts in the ’60s, Brian Wilson, main songwriter and creative force behind the Beach Boys, is a musical icon having delivered the world the sought-after California dream via skyward melodies, surf guitar riffs, grand piano ballads, and larger-than-life arrangements. After a drug-induced mental breakdown in ’70s and a lengthy recover period, Wilson released his debut solo set in 1988, followed by various solo releases, compilations and live records over the next decade. In 2004, Wilson hit a creative and commercial zenith with the release of SMiLE, a record originally conceived 38 years earlier as the follow up to 1966’s wildly influential Pet Sounds.

Fun Fact: The title of That Lucky Old Sun was borrowed and inspired by a tune of the same name, first popularized in 1949 by Frankie Laine. Before the record’s creation, Wilson found himself singing the track and rushed to the store, bought Louis Armstrong’s version, taught himself to play the tune, and was moved to reunite with his former collaborator, Van Dyke Parks. Soon, the duo — along with Wilson’s band — were working on what became That Lucky Old Sun.

Now Watch This: Trailer for That Lucky Old Sun