After nearly a decade, the trio perform their seminal album The Unauthorized Biography of Reinhold Messner at a one-time-only event. 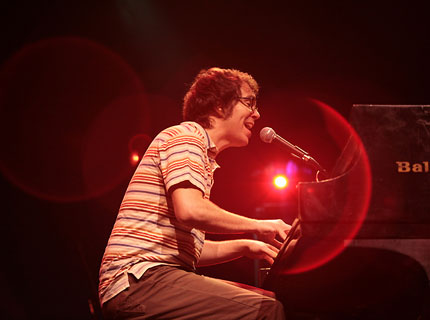 Deafening applause filled the air as the Ben Folds Five appeared together onstage for the first time in nearly a decade Thursday night to perform their final album, 1999’s The Unauthorized Biography of Reinhold Messner, in its entirety in their hometown of Chapel Hill, North Carolina. The performance was filmed as the first installment of MySpace’s Front to Back, a program designed to honor iconic records of the MySpace generation.

As Folds struck the opening notes to “Narcolepsy” and drummer Darren Jessee (also of Hotel Lights) and bassist Robert Sledge joined Folds for their trademark three-part harmonies, the room erupted into ecstatic approval. The trio seemed instantly at ease, flashing jubilant glances to one another onstage and performing the often hectic, fuzz laden track to perfection. After the climactic ending, Folds, now rubbing his fingertips, joked, “If I’d known about this gig 10 years ago I would have sequenced the album a little different.”

Complete with backing synth, a four-piece horn section, and timpani drums, the performance was true to the original recording in every sense of the word, with Folds’ father, immortalized on “Your Most Valuable Possession,” even appearing onstage to recreate his early morning voicemail rant, much to the delight of the crowd. But, as expected, it was “Army” that drew the biggest reaction, with the audience — many of whom traveled great distances for the gig — singing loudly and dancing in the aisles.

After capping the album and disappearing offstage, the trio returned for a much-anticipated encore that found them revisiting older tracks like “Jackson Cannery,” “Where’s Summer B?” and ” Julianne.” At this point, Folds chatted with the crowd, admitting, “I didn’t want to talk about this before because they were filming, and I hate hearing myself talk,” before reminiscing on the band’s early days in Chapel Hill, their awful album that never got released, how much it sucked loading Folds’ baby grand piano in the back of a pickup truck for every gig, and how “Army” was the “beginning of the end of the commercial success of Reinhold Messner.” The audience, too, seemed more at ease with the cameras no longer rolling, and dancing ensued for the remainder of the night.

Finally closing out the encore with a roaring version of “Song for the Dumped,” off 1997’s Whatever and Ever Amen,Folds lifted his stool, glanced at the audience for approval, and gave a, ‘Oh, what the hell!’ look before hurtling his seat into the piano, just like the good old days.

Dane Smith
Tags: ben folds five, We Were There