Alice in Chains Return to Studio 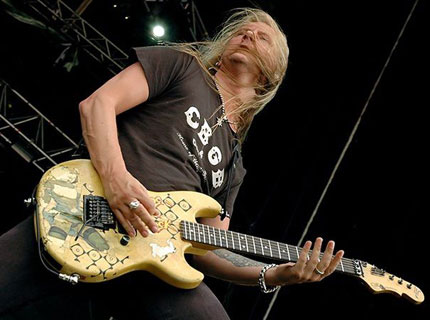 After a 13-year absence from the LP game, the tragic death of original frontman Layne Staley, and the recent hire of singer William DuVall, Seattle grunge stalwart Alice in Chains will return to the studio to record a new album, according to a post from band blogger Baldy. [Via NME.com]

The quartet “gathered in a rehearsal studio in North Hollywood” in late July and early August to “polish and spit-shine” new material, and will “reconvene” this October to record the follow up to their last release, 1995’s self-titled set. “As 2008 winds down, band activity will be gearing up, and at some point in 2009 you’ll finally hear what I’ve been raving about for the last several months,” writes Baldy.

But with the addition of Duvall in place of Staley — whose trademark croon branded the band’s sound — many devout fans wonder if the new material will live up to the Chains’ ’90s heyday. True, Staley’s pipes are irreplaceable, but Duvall — who has performed with Alice on tour– does an excellent job of filling in. See for yourself in the video below. Now for the lyrics…

Alice in Chains with Duvall: