AC/DC have revealed the first North American leg of their Black Ice World Tour, set to kick off Oct. 28 in Wilkes-Barre, PA. The 23-date outing is the band’s first since 2001.

Hitting major cities nationwide and set to conclude December 18 in Charlotte, NC, the tour will support the Oct. 20 release of the Brendan O’Brien-produced Black Ice, the quintet’s fifteenth studio album to date, which will be sold exclusively via Wal-Mart and Sam’s Club stores as well as ACDC.com.

Tickets go on sale September 20; more U.S. dates are expected to be announced in the coming months. 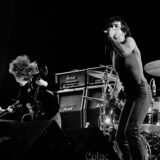