Indie rock luminaries craft an intimate sound with new full-length You & Me, due Aug. 19. 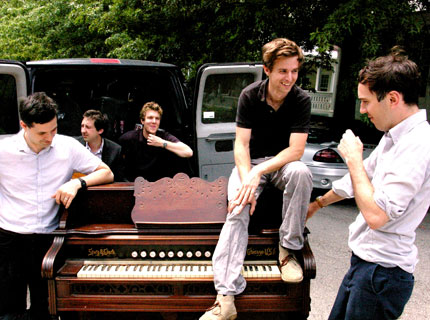 What? Reeling in the amped up sonic 2002’s amped up debut Everyone Who Pretended to Like Me is Gone, indie rocker the Walkmen — whose last effort interpreted Harry Nilsson’s 1973 collaboration with John Lennon, Pussycats — now present their drearier, bluesier side with their fourth album, You & Me. The album, bordering on the retro, sees singer Hamilton Leithauser’s vocals in a new light, at times channeling those of Robert Plant, and others, Bob Dylan, especially with “In the New Year.” Yet don’t expect any “Kashmir”-like epics from this lot. The band’s characteristic windswept guitars highlight “Canadian Girl,” while a mournful sense seeps into “Postcards From Tiny Islands” in hollow melodies.

Fun Fact: Flexing their power to help a great cause, the Walkmen chose to pre-release You & Mevia amiestreet.com to raise money for cancer research at Memorial Sloan-Kettering Cancer Center, where a seven-month-old boy connected to the band is receiving treatment.