Visit the Dell Dome at Bumbershoot This Weekend!

Come in and hang out with the likes of the Girls and Tapes 'N Tapes. 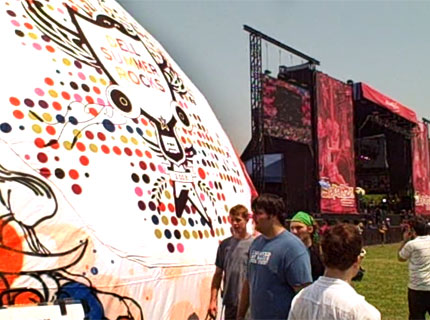 We’ve become regulars at the Dell Summer Rocks Dome, frequenting the state-of-the-art shelter during blistering days at both Lollapalooza and Virgin Mobile Festival. This weekend, the stylish tent will be in Seattle, offering numerous amenities to concertgoers, including tattoo artists, button-making, live painting, loads of computers and much more.

In addition to the aforementioned goodies, the Dell Summer Rocks Dome also has some of the festival’s hottest acts stopping by to hang out. Drop in to see the schedule — we’ll see you in the Dome!

Check out info on the Dome and loads of other goodies at delllounge.com, and be sure to catch the Dell Dome at these upcoming festivals: Bumbershoot in Seattle; Monolith in Colorado; and Austin City Limits in Austin, Texas.