Blasphemy! Exorcism! Sacrifice! The Southern kin shed their religious roots in the video for their forthcoming album, Only By the Night. 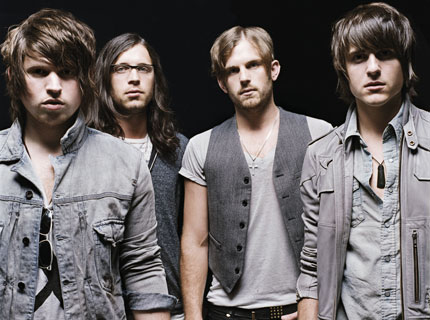 We always knew the Kings of Leon — yep, those three Southern brothers (raised by a preacher) and one cousin — had a bit of the Devil under their skin… you know, with the cigarettes, booze, and leggy model girlfriends and all. But with the music video for “Sex on Fire,” an excellent, anthemic rocker off the quartet’s upcoming album Only By the Night, the boys let us know just how possessed they’ve become.

With frontman Caleb Followill sweating and throwing a tantrum atop a rickety bed, quasi religious symbols abound — ripped Bible pages, crucifix necklaces, and even a few sacrificed chickens. His bandmates attempt to contain him as the tune’s searing riffs and gigantic choruses plow forward. When the six-string twangs crescendo near the song’s end and the drum fills chime in, Caleb expels a black, fuzzy cloud from his mouth (a la The Green Mile). It’s a decidedly darker treatment for the Followills, and certainly a song likely to possess the minds of listeners.