New Black Kids Video: “Look At Me (When I Rock Wichoo)” 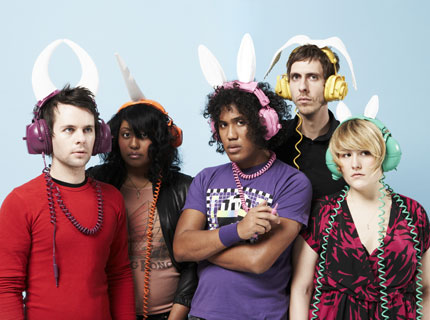 Sure, we’ve ridden amusement park rides before, but none have been nearly as weird as the one that Black Kids ride in the video for “Look at Me (When I Rock Wichoo).” In the clip, the Floridian quintet board a roller coaster inside a gigantic bass drum before being transported into a mystical world of flying cars, funky costumes, and vintage Saturday morning cartoons — trippy!

“I don’t believe in happenstance / You’re going to give me your last dance,” lead singer Reggie Youngblood coyly croons at the camera while sister/keyboardist/backup singer Ali wards off evil skull-faced warlocks with her newfound magical powers — um, not exactly your typical Disneyland fare. Partie Traumatic is out now on Almost Gold/Columbia, and the band is featured in the August issue of SPIN.

Now Watch This: Black Kids, “Look At Me (When I Rock Wichoo)”