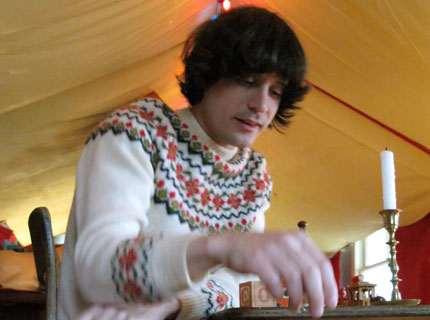 What? The occasionally off-kilter underground project the Music Tapes is the brainchild of Julian Koster, most notably of seminal indie rockers Neutral Milk Hotel. Koster’s third Tapes LP, Music Tapes For Clouds and Tornadoes, out now on Merge, guides listeners on a magical mystery tour of sorts. Nine years in the making, the record cobbles together a sonic rollercoaster, using every piece of would-be junk possible, including an 1895 Edison wax cylinder recorder. The album, rounded out by Koster’s airy croon, also features his signature singing saw and banjo, and collectively coalesces into a freaky, Gainsbourg-on-mushrooms pop sideshow.

Who? As a staple of the Athens, Georgia-based Elephant 6 Recording Company — the folks who brought you Apples in Stereo, Neutral Milk Hotel, and Of Montreal — Koster made his name with the otherworldly singing saw wail on NMH’s classic In The Aeroplane Over the Sea. Since frontman Jeff Mangum deserted NMH in ’98, Koster has appeared as a member of fellow 6-ers the Olivia Tremor Control and Major Organ and the Adding Machine, the latter which also featured Mangum and Of Montreal’s Kevin Barnes. But with the Music Tapes as his main creative outlet, the jack-of-all-trades spreads his wings, manning duties on an array of instruments including accordion, guitar, mandolin, bass, and banjo in addition to his signature saw.

Fun Fact: On Music Tapes For Clouds and Tornadoes, Koster worked with bouncing balls as percussion, a 7-foot-tall metronome, and personal creations he dubbed Static the Television and the Clapping Hands Machine.