Ladies and Gentlemen, the Fabulous Stains! 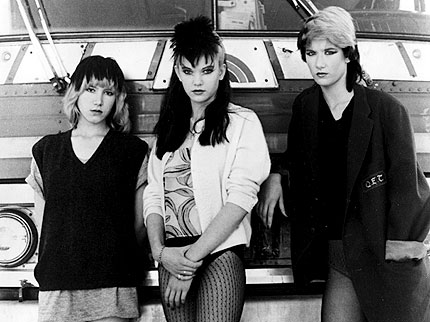 The missing link between punk and riot grrl wasn’t a band or even a fleeting subgenre, but an amazing 1982 Paramount music-biz satire that was never properly released, seen only on late-night cable, crappy bootlegs, and at art-house revivals. That mistake will finally be mended when Ladies and Gentlemen the Fabulous Stains hits DVD on September 16, its borderline-obsessive cult following all but guaranteed to expand virally. Have we mentioned it costars two Sex Pistols, a founding member of the Clash, and an underage Diane Lane in a see-through top?

It was a production so chaotic that the ending was shot two years after it wrapped, and Oscar-winning screenwriter Nancy Dowd (Coming Home) not only feuded with director and music mogul Lou Adler (who produced the Mamas & the Papas, Carole King, and, in the more literal sense, rocker son Cisco Adler), but took her name off the project after being groped by a camera operator. Yet the film is richer than just a time capsule, holding up as a feminist yet seedy and often hilarious rise-and-fall chronicle of a Pennsylvanian girl-punk band called the Stains.

Watch a mini-documentary about the film:

Composed of brashly cynical lead singer Corinne “Third Degree” Burns (Lane, barely 15 at the start of shooting), her sister Tracy (Marin Kanter), and cousin Jennifer (Laura Dern, at 13!), the Shaggs-like trio become an overnight sensation thanks to their in-your-face look and attitude. With skunk-striped hair and red lightning-bolt eye makeup that inspire a legion of copycat fans, Burns spits at her audience: “I’m perfect, but nobody in this shithole gets me because I don’t put out.” Teen rebellion is a fact of life, but just how comfortable was previously squeaky-clean Lane in such a provocative role?

“You mean, like, ‘Here are my tits?’ ” Lane says with a laugh, nearly three decades later. “I was freaking out! The most poignant irony is that my daughter is going to be exactly the age I was when the DVD comes out. It’s not shocking, just a little bit embarrassing that it happens to be your mom.” And while Lane may look tough on film, there’s a reason they call it acting. “At 15, you’re just an egg out of its shell walking around, trying desperately not to get maimed emotionally. I was just mortified that we were supposed to be as bad as we were as a band. That was my 15-year-old agenda: Do we really have to suck this bad? Couldn’t we be on key at least?”

The Stains eventually progress as musicians, but they still have hard lessons to learn about industry exploitation when they join a tour and become uneasy acquaintances with the Looters, who sound exactly like you’d imagine they would with a lineup played by punk icons Paul Cook, Steve Jones, Paul Simonon, and a then-unknown British actor named Ray Winstone on the microphone.

“Ray is a big star now. He’s completely changed,” says Fee Waybill, lead singer of the Tubes, who costars as the theatrical, Gene Simmons-like Lou Corpse. “He used to be this skinny heartthrob punk, and now he’s turned into this great big fat heavy, like in Sexy Beast and The Departed. Ray was on Diane the entire time. He was hitting on her so hard.”

As the fading frontman of the Metal Corpses, elder statesmen to the Looters and the Stains, Waybill remembers an unusual onscreen moment when Winstone’s Billy punches him for being a condescending wiseass. “We rehearsed it, and everything was great,” he says. “Then the camera started rolling, he turns around and just fucking clocks me as hard as he could, full blast in the eye. I almost passed out; I couldn’t believe it. The cameraman was loving it, spinning his arms around: ‘Keep going, keep going.’ And I’m trying to say my lines. We weren’t filming in order, so I was off for a week because my eye was all black and blue and swollen. Ray felt so bad — he just got carried away.”

It’s an appropriately rock’n’roll anecdote, and Waybill is full of them, such as when he had to drag his new Sex Pistol pals out of a local bar and toss them in a cab after fawning girls’ irate boyfriends threatened to pound them, not once, but twice. Or the truth behind a scene in which he and the late Vince Welnick, his real-life and onscreen bandmate, score coke in a club. “The props guy is using this stuff Mannitol, which is baby laxative, and we both have to see if it’s any good,” says Waybill. At one point, without telling either actor, someone replaced the fake drugs with the real thing. “I do a hit, Vince does a hit, and all of a sudden, our jaws are dashing back and forth, we’re snorting and sniffing, everyone’s starting to get jumpy. And I hated coke. They cut, and Lou goes, ‘Man, that looked so real!’ Then we do the same thing from five or six different camera angles. The one and only time I ever snorted coke is on film, and I’m just whacked.”

Why Paramount took the Stains’ advice and chose to “not put out” the film in the ’80s may have something to do with a poorly received test screening (when asked to comment, Adler said he couldn’t remember), but now that music-rights clearance nightmares have finally been resolved, a new generation can join the cult. Courtney Love is already a fan, as is Tobi Vail from Bikini Kill; and Brett Anderson (Donna A. of the Donnas), who first saw it as a grade-schooler, considers it a huge inspiration. “There aren’t many depictions of an all-girl band,” she says. “The way they’re getting their butts pinched on the bus and all that shit-we had to [deal with] that! The message I got was that you’re allowed to dress however you want and not be ‘asking for it.’ “

Whether the DVD release will demystify the film’s underground vitality remains to be seen, but its cast and crew welcome the sense of closure. Says Lane, who participates in an audio commentary track with Dern, “It’s nice to let the genie out of the bottle finally. I can exhale and say, ‘There are no more secrets.’ “