Jack White on ‘Bond’ Duet With Alicia Keys: We “Screamed and Moaned”

Mum when the news originally leaked, White now sounds off on his and Keys' landmark collaboration on the theme song for Quantum of Solace. 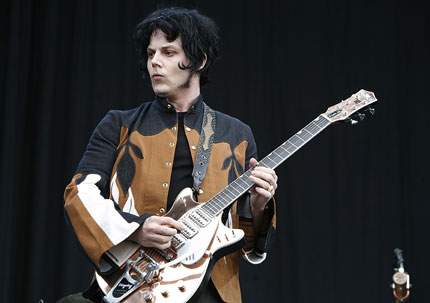 For R&B songstress Alicia Keys, collaborating with rock’n’roll heavyweight Jack White on “Another Way to Die,” the theme song for Quantum of Solace and the first-ever duet in Bond movie history, was like a dream come true. But isn’t about time six-string deity Mr. White chimed in?

Well, we’re in luck — the elusive Raconteurs and White Stripes frontman has spoken:

“After a couple of years of wanting to collaborate with Alicia Keys, it took James Bond himself to finally make it happen. Alicia put some electric energy into her breath that cemented itself into the magnetic tape. Very inspiring to watch. It gave me a new voice, and I wasn’t myself anymore. I drummed for her voice and she mimicked the guitar tones, then we joined our voices and screamed and moaned about these characters in the film and their isolation, having no one to trust, not even themselves. Maybe we became them for a few minutes.

The Memphis Horns were there to help us out, along with some of Nashville’s finest. Might be the first analogue Bond theme in twenty years, I don’t know. We wanted to push soul into those tapes, and join the family of Barry, Bassey, Connery, and Craig.”

No word on the song’s release date, but White better watch his back — it’s never smart for an apprentice to move in on his master’s territory, and Keys is Bob Dylan’s girl!