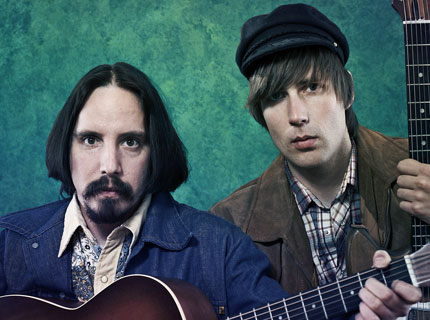 What? If you’ve ever taken any sort of dreamy downer drug — recommended Benedryl dosage included — we can safely assume you’re familiar with the warm-blood-surge, numbed-spine, ocular zoom-out beauty that can softly sweep through your veins. The sonic equivalent prescription is Canadian psych-folk duo Human Highway, who, with their revitalized mid-’70s Simon and Garfunkel-esque debut offering, Moody Motorcycle, take us on a somber, contemplative excursion through vibrant and vivid sunset dreams. The album, like a drug, is addictive, with inconspicuous melodies finding their way into the back of your head and onto the tip your tongue. The title track is the most accessible journey — though the record in its entirety acts as one long, luscious trip. Moody Motorcycle will be released stateside on Suicide Squeeze.

Who? The faces and names of Human Highway are both friendly and familiar to the indie ear. The band is a result of the collaboration between the marvelously prolific Islands frontman, Nick Thorburn, and his good friend, former Islands guitarist and equally active Canadian troubadour Jim Guthrie. With their ’06 debut, Return to the Sea, Islands made international noise with their Caribbean-infused melancholic folk-pop and unforgettably interactive live shows. Though Guthrie, a Juno award nominee, has since left the band, he continues to — in addition to Human Highway — record solo and is expected to release a new album sometime before the end of the year.

Fun Fact? Human Highway take their name from the 1982 pre-apocalyptic (last day on earth) comedy flick of the same name, which was directed by and stars Neil Young as a wanna-be rock star gas station attendant. Weirdly enough the film also stars Devo’s Mark Mothersbaugh. A must see cult classic, the musical-style dance number at the end is brilliant — drugs not required.