The punk vets prove that the passing years haven't diminished their performing power. 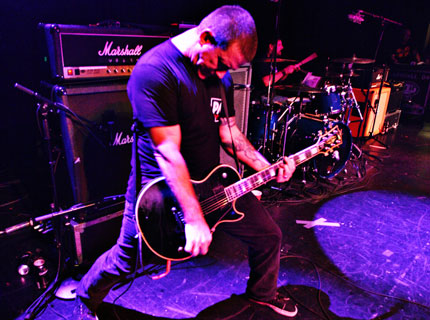 They may not be the youngest punk rockers around these days, but Hot Water Music still serve up a killer dose of youthful adrenaline… which you might expect from a band that has died and been resurrected more times than Bob Saget’s career.

At one hour and ten minutes, which included a three-song encore, last night’s show at San Francisco’s Regency Grand Ballroom was nothing short of the punk band’s late-’90s heyday. Aside from one botched intro, the group was tight. Keeping immaculate tempo, drummer George Rebello, who seemed to own each song’s intro, transitions, and finish, hardly paused between numbers.

Bassist Jason Black, at center stage, acted as the 11 on Hot Water Music’s amp — not that guitarists Chris Wollard and Chuck Ragan weren’t also pushing the limits. But Black’s chandelier-shaking cluster bombs complemented the raging guitars like thunder to lightning.

With AFI’s Adam Carson and Davey Havok in the crowd, the boys from Gainesville, Florida, tore through nearly 25 songs and about a dozen pints of Guinness, while the black-clad, ear-plugged crowd shook their fists in appreciation. “Our fans make the music real,” a bullet-sweating Ragan said after the show between hugs with admirers. “We’re just holding the guitars.”

Matt Bloom
Tags: hot water music, We Were There