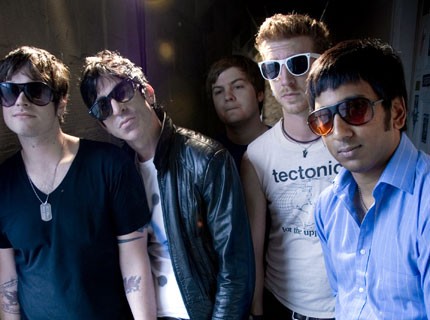 What? Fusing ’80s-style synths and high-pitched yelps with punk aggression, this quintet is like a loosely collected hybrid of the Cars, the Voidoids, and Devo — and would no doubt be pleased by the inherent Ramones comparisons spurred by their giddy pop sensibility. The Girls will be appearing at Seattle’s Bumbershoot Festival this Saturday, Aug. 30, showcasing their sophomore release Yes No Yes No Yes No, which drops September 16 via Dirtnap Records, the home of numerous other Northwest punk acts, including the late Exploding Hearts.

Who? Seattle quintet the Girls, ironically, are an entirely male group that has, at one time or another, featured members of four, count ‘em, four different Emerald City punk bands, including the Briefs, the Spits, and the Catheters. With downtown brash and new wave flash, the Girls have endured several line-up mutations over the years; Currently the band is comprised of Shannon Brown (Vox), Vas Kumar (Guitar), Griff (Bass), Derek Mason (Keyboards) and Elie Goral (Drums).

Fun Fact: Recording of the Girls’ new album took nearly six months, with the members sneaking away from their day jobs — health insurance rep, Java code writer, Microsoft employee — to hit the studio. And according to drummer Goral, a feeling of indecisiveness plagued the efforts and eventually led the band to the album’s title, Yes No Yes No Yes No.