Break out your best flannel -- the seminal '90s band is playing a rare live set at Seattle's Bumbershoot this weekend. 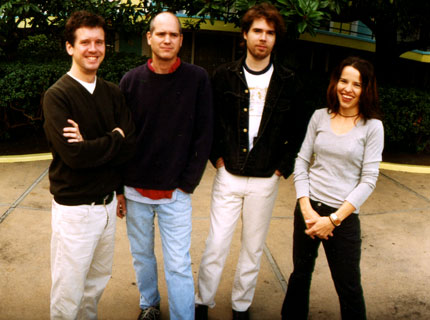 AND THE FOUR REASONS ARE:

Every band you like owes them a debt.
Now entering their 20th (!) year, this Chapel Hill quartet virtually invented everything about indie rock worth emulating: economic self-sufficiency, creativity unchecked by careerism, perfect pop hooks, and songwriting chops that have matured at the same rate the band and their audience themselves.

Laura Ballance pogo-ing.
How she’s managed to hop up and down that much while wielding a heavy bass, mere feet away from a whirling Mac McCaughan all these years without grievous injury may be the most remarkable aspect of their modest but illustrious career.

The climactic breakdown/crescendo in “New Low.”
That’s how you end a fuckin’ song, kids.

Their live shows are as rare as Bigfoot sightings.
The notable ’90s band that has never officially broken up nor cashed in for a lucrative reunion, Superchunk isn’t totally inactive, yet they only play on special occasions. (See: South By Southwest in 2007, an Obama rally in North Carolina earlier this year…or rather, you shoulda seen these.) Maybe they’ll put out another album and do another tour. Maybe they won’t. They have no agenda, they have no bitterness about getting lapped in the alt-rock sweepstakes. They play the songs they feel like playing, but chances are, they’ll still end with “Slack Motherfucker” anyway.