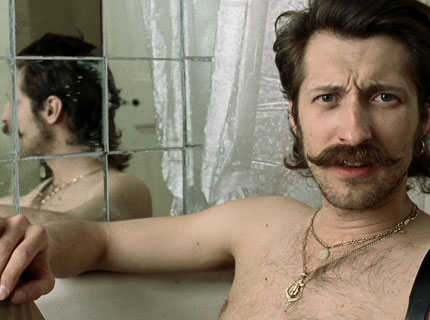 There’s a moment towards the end of Filth and Wisdom, Madonna’s directorial debut, when the character Andre, the lead singer of a band called Gogol Bordello — who, in one of many puzzling choices made in this film, is played by Eugene Hutz, who is really the singer of Gogol Bordello — looks squarely into the camera and says, “We’re all on the same ship.If it sinks, we all go down together.” He seems to be talking about himself and his fellow actors, because their performances — whether flawed or flawless — are sunk from the start under the burdensome weight of Madonna’s plodding hand.

Now, don’t get me wrong. I like Madonna. I like the whole “come from nothing, claw your way to the top, and fulfill your various dreams” story.But just because she’s scratched herself to the point of wealth and fame — filth and wisdom, if you will — where she’s allowed indulgences like this, it doesn’t mean she’s good at everything she tries.She may be a savvy popstar, but savvy screenwriter and director she is not.

It’s easy to believe in Andre. Hutz takes his natural gift as frontman and parlays it comfortably into ringleader of a motley bunch of sex perverts. Makes sense. What doesn’t make sense in Filth and Wisdom is, well, anything else. Try to wrap your head around these concepts:
What does stealing pills have to do with saving African orphans?Why does a Britney song inspire a reluctant dancer to spread her stuff?Are we supposed to be okay with a straying husband because we see him giving his sad wife some flowers?It’s all a bit tidy.

According to the film’s press release, Madonna was so inspired by the characters in this story that she extended what was meant to be a short film into a feature. Anyone with a shred of screenwriting experience would know to throw some curveballs in, a few loose ends. Unfortunately, Madonna’s writing partner here is Dan Cadan — whose only credited experience is as Guy Ritchie’s assistant, and as writer of some of Madonna’s liner notes.

“The road to success is paved with humiliation,” says Andre.Let’s hope, for the sake of Hutz’s brilliance, he’s right.