Omaha's emo-dance outfit perform their new album at Manhattan's Terminal 5 venue to the delight of a rowdy audience. 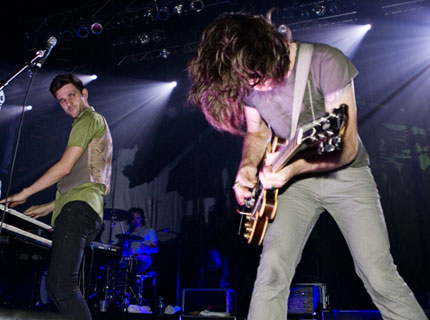 “Good show so far. Let’s see if we can’t fuck it up,” exclaimed the Faint’s lead singer, Todd Fink, as the electro-rock quintet launched into their set at Manhattan’s cavernous Terminal 5 venue last night. Indeed, electrifying opening sets from keytar-pop duo Shy Child and industrial hip-hop collective Antipop Consortium set the bar relatively high for the Faint — and the packed crowd’s feverish anticipation only raised the collective level of expectation.

When Fink and friends took the stage twenty minutes late, the audience’s enthusiastic murmur worked into a frenzy as the band dove head first into a set comprised of fan favorites and material from their latest full-length, Fasciinatiion. Fink may have been the only member clad in mad-scientist garb — complete with black, bug-eyed goggles — but the entire band swayed and thrashed like crazed Igors, running through set highlights “Machine in the Ghost” and “Get Seduced” with machine-like precision. Eerie animations projected behind the band might have created a goth-friendly atmosphere, but in the end, it was clear that the Faint were more concerned with moving the dance-happy crowd’s feet than raising the dead.

Check out more pictures from last night on page 2.


Joel Petersen and Todd Fink fall in lockstep together. / Photo by Jackie Roman


Dapose takes a turn on the keys. / Photo by Jackie Roman

Larry Fitzmaurice
Tags: the faint, We Were There

The Faint Get Wild in Raucous, Punk-Fueled ‘Scapegoat’ Video