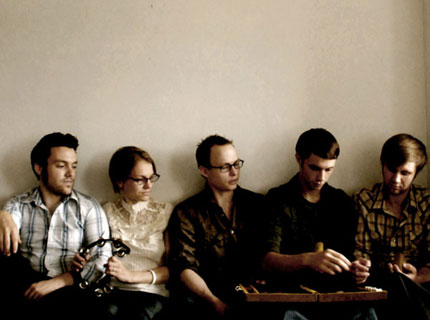 Who? Like Ryan Adams singing for the Boy Least Likely To, Good Night, States marry singer-songwriter vocal stylings and confessional lyrics to near-twee tunes anchored by electronic blips, xylophone and the occasional drum machine. The Pittsburgh-based quintet sprinkle carefree handclaps and sunny male/female harmonies on a Wilco-indebted Americana foundation. But lead Statesman Steve Gretz can put on a straight face like on the brooding “Change of the Seasons” and even channels a bit of the Arcade Fire’s Win Butler on the more epic, but not quite calamitous “The Family Dark,” available below.

Their latest: The band released their debut album, entitled Short Films on Self-Control, earlier this year.

Recommended if you like… The New Pornographers, The Boy Least Likely To, Wilco

Attention Bands! Good Night, States was selected for our Buzzcatcher section via the band’s electronic press kit, which was submitted to SPIN.com via Sonicbids, a website aiding up-and-coming bands. To be considered for a Buzzcatcher spotlight, sign up at sonicbids.com and submit your music today!