The Bee Team Highlight a Swarm of Bands in Philly

The freaky banjo-pickers were joined by a bit of Mean and some Deleted Scenes at the Mill Creek Tavern. 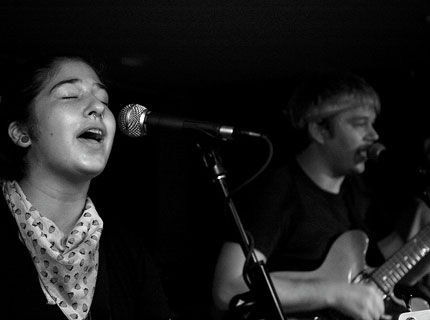 Last night (August 3), the Mill Creek Tavern in West Philly felt like a college student center, as academics from UPenn and the University of the Sciences co-mingled with hipsters, hippies, and bar regulars. The show was intimate, but each group brought with them their own cadre of dedicated fans, all of whom were won over by the other bands.

Deleted Scenes alternated between clean guitars with complex drums and herky-jerky, Devo like breakdowns, sounding like Vampire Weekend without the Africa-pop pretensions.

Never, out of North Carolina, seemed at first like a liberal arts college’s glee club. All beards and sweaters, they sang sweet three-part harmonies with only two acoustic guitars and a snare drum to accompany them. According to the band, though, this isn’t their usual incarnation.In between songs that would fit well on a mixtape with Bon Iver and old Animal Collective tunes, the band informed the audience that it was really an electric rock band with full drums, but that their van broke down and they couldn’t take their amps or a full kit.

It’s hard not to like the Bee Team just from the way they look onstage. Rock signifiers like American Flag bandanas and sleeveless T-shirts bump against their inviting, friendly stage presence, as they innocently implore the audience to take their shirts off.Singers Josh Craft and Chrissy Tashjian may well be in line to become the Johnny Cash and June Carter of modern-day punk-folk.A Grand Ole Opry of freaks, the group’s pairing of banjo picking and male-female vocal interplay lends itself to lyrics about the weird small things that go on in our real lives.

Tashjian’s clear, beautiful voice can even distract from moments like the line in their catchy theme song “Birds and Da Bees” that requests someone “just give me time, give me space between your thighs.” But somehow, the Bee Team succeed in making all of their lyrical topics seem as pure as their melodies.They closed their set by getting members of the audience onstage to help harmonize the Beach Boys’ “Vegetables.”

The Mean ended the night with their melange of ’60s psychedelic blues, Latin rhythms, and indie rock jangle. The six-piece got the rest of the crowd onto the dance floor with their snake-charm guitars and clave beats. It was an oddly fitting end to the night, their three-guitar attack jumping from genre to genre, from decade to decade, but always finding the common beat to hold it together.Check out pictures from last night on page 2


The bandana-clad singer/guitarist gets deep. / Photo by James Hamilton


Reinhart stops for a refresher. / Photo by James Hamilton

Eric Rivera
Tags: bee team, We Were There