A Weekend with the Breeders

SPIN.com's William Goodman bookends his weekend with sets from Kim Deal and co. -- starting with an exclusive in-store performance and concluding with a headlining gig at Brooklyn's McCarren Park Pool. 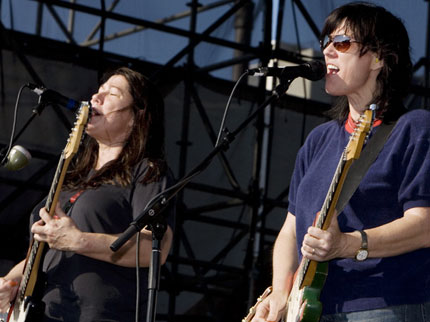 At 9:30 Friday night (July 11), with some 35-40 other devout fans packed in the tight confines of New York’s Other Music, the Breeders’ Kelley Deal, in her silly, bubbly rapport with sister Kim, revealed she, um, sort of learned the violin to accompany the timeless, nostalgic Last Splash tune “Drivin’ on 9.” As Kim’s soft rasp kicked in, Kelley, with a smile of doubt spreading from ear to ear, stroked the bow from side to side hitting notes both on and off, and plucked through the song’s soft sections.

Sure, she did her best, but a hired musician (or perhaps the tune’s original player Carrie Bradly) could have topped it standing on their head. But it’s this ease in personality — the sisters’ humor, comfort, and lackadaisical punk manner — that makes the Breeders who they are and helps explain their uncanny knack for ebullient, pop-smart garage-rock hooks and slanting lyricism.

This past weekend was — considering my itinerary and that the Breeders are, simply put, my favorite band — one I had been highly anticipating. And Friday night’s gig — the much-mooted in-store set — was the weekend’s apex, like watching the Dayton, OH-based alt-rock stalwarts jam in a basement, creating an intimacy that would be hard to top.

Opener “No Aloha” never sounded so pristine, and Kim Deal’s nervy, jaunty linebacker-like movements accentuated the tune’s dynamics well; “Divine Hammer”‘s high-noted sheen and sisterly vocal layers were spot-on, glimmering within the small room’s walls; Kim’s fierce fuzzbox vocals on “Cannonball” were urgent as ever; and “Bang On”‘s nagging drawl of, “I want no one / No wants me” drove along the rhythm of straight-forward drums. And the amusing kinfolk between-song banter (and there was plenty of it) ranged from awkward to hilarious.

Friday’s gig was tough to beat, but Sunday’s set (July 13) at Brooklyn’s McCarren Park Pool was a valid attempt and gave their set list room to breath. Naturally, the summery rock-collage of “Cannonball” got the crowd jumping, but here the highlights were in the fine print; “Tipp City” and “Pacer,” both tunes from Kim Deal’s rickety garage-pop side-project the Amps, sparkled; a cover of Guided by Voice’s high-energy “Shocker in Gloomtown” rocked the socks off many; Mountain Battles’ “German Studies,” a stark art-popper sung entirely in German, engaged with a wall of ghostly aaahhhs; and the anthemic “Overglazed” gorgeously epitomized the band’s newfound production gloss.

During Friday’s performance of new tune “Here No More,” Kim explained, “My Mom has the Alzheimer’s, and I asked her if a song started with the lyric, ‘Not here but gone before,’ what would the next line be.” Hollering in an approximation of her mother’s tone, she continued, “Here No More, Here No More!” Fittingly, Kim and Kelley closed their Sunday set with the tune, singing its countrified verses like members of the Carter Family. Or at least contemporary members that slug non-alcoholic Sharp’s on stage, can render the bare minimum into rock majesty, and happened to have written some of the most artistically willful alt-pop of the last decade.

More photos from this show >>

The Breeders at Other Music in NYC / Photo by William Goodman

Kelley Deal on the mic / Photo by Jackie Roman

A particularly packed-in crowd proves Kelley and Kim are still quite a big Deal. / Photo by Jackie Roman

William Goodman
Tags: The Breeders, the pool parties, We Were There