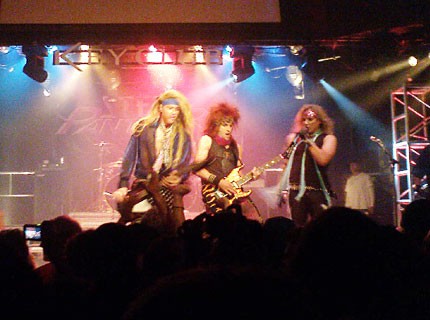 The sleaze and the cheese were turned up to 11 during ’80s-inspired heavy metal comedy act Steel Panther’s JVC- and Spin-sponsored set at the Key Club in Hollywood last night (July 21). Openers Blacklist Union celebrated their new CD with black leather- and-bombast- fueled rock, and Albatross warmed things up with a swamp-metal fest. And since the show launched Carstereoke.com’s new video contest, headliners Steel Panther took the stage by premiering their “Death to All But Metal” clip, which they put together in honor of the challenge.

The spandex-clad quartet then delivered hair metal classics ranging from Mötley Crüe’s “Dr. Feelgood” to perennial crowd favorite, Bon Jovi’s “Livin’ on a Prayer,” which had members of the capacity crowd pumping their fists and singing along. Like an X-rated Spinal Tap, the band lambasted metal’s debauched legacy with plenty of jokes about groupies and the like between songs.

Highlights included the “hair solo” played by glamour-puss bassist Lexxi Foxxx, as his band mates blew his hair like a wind machine, and their wild take on Van Halen’s “Jump,” which found plenty of vixens dancing suggestively onstage. Guitarist Satchel played an over-the-top solo while dangling from a harness above the crowd before unleashing the epic intro to Guns ‘N Roses’ “Sweet Child O’ Mine.”


The evening’s DJ pauses from spinning at the pre-party at Plush, located within the Key Club. / Photo byAuxy Espinoza