What we learned this week: Pearl Jam's Mike McCready really appreciates his fans. Toadies rock just as hard acoustic. And much more. 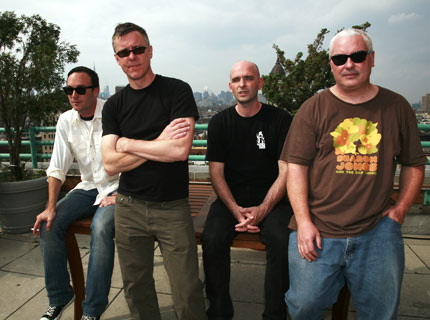 Between bubbling beer-and-BBQ daydreams and trips to the fireworks stand to stock up on smoke bombs and sparklers, much was learned this week with lessons arriving courtesy of Pearl Jam guitarist Mike McCready, reunited hard rockers Toadies, and many more. Here’s a rundown:

What we learned from Pearl Jam’s Mike McCready: The Seattle-based alt-rockers really appreciate their fans. After three weeks on the road chasing his favorite band, bartering for rides, traveling thousands of miles, and logging nearly 500 videos on SPIN.com, superfan Zack Newman gets a big reward: 25 minutes of sit-down time with guitarist Mike McCready.

What we learned from the Toadies: Even sans amps, Fort Worth, TX-based hard rockers the Toadies rip it up. Prior to a sold-out show at New York’s Bowery Ballroom, Vaden Todd Lewis and Clark Vogeler strummed a few classics for the SPIN.com cameras, including charging, bluesy banger “I Come From the Water.”

NEWS:
– Jay-Z vs. Oasis Glastonbury Festival “Hova’s “Wonderwall” performance at Glastonbury has the message boards bangin’ like it’s Kanye at Bonnaroo all over again. Let’s see what folks on both sides of the fence (and pond) have to say.”
– Glastonbury ’08: The Best, Worst, and Everything In-Between “VIDEO! Spin’s Craig McLean weighs in on the mammoth British festival and of course, Jay-Z’s playful stab at Oasis.”
— This Month’s Book Club: Milan Kundera’s ‘The Unbearable Lightness of Being’ “Members of Circa Survive, the Matches, Street to Nowhere, and more discuss Kundera’s The Unbearable Lightness of Being, selected by Meg & Dia’s Meg Frampton.”
– Ian Curtis’ Gravestone Stolen, Who’s Next? “The stone marking the mopey Joy Division singer’s grave was stolen this week, begging the question: Which dead musicians’ graves need higher security?”
– Gym Class Heroes’ McCoy Reacts to Racial Slur, Arrested for Assault “A concertgoer taunts the MC during the alt-hip-hop act’s set at the St. Louis stop of the Warped Tour, spurring an onstage scuffle and ensuing arrest.”