The poppy duo Mates of State were among many highlights during Download's second-day stop in L.A., which also saw Datarock and the Duke Spirit, among others, deliver show-stopping performances. 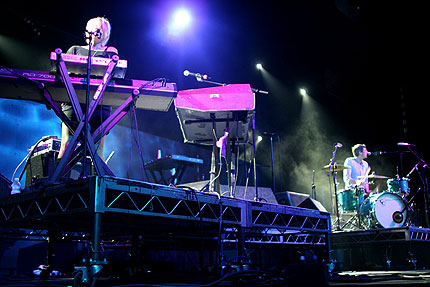 Two guys were talking in the Gibson Amphitheatre men’s room around 4:00 P.M. during last night’s (July 20) L.A. stop of the three-city Download Festival. One said to the other, “I’ve been to a lot of festivals, dude, and this is one weird festival! But Mute Math and Brand New are really cool.” The other replies, “I know, and we still have a lot of time to drink before they go on.”

This snappy snippet of dialog occured approximately two hours before Mute Math hit the stage with enough energy to discombobulate most any motion detector — so those guys were right about drinking time. And while “weird” is not the first word, or even the best one that comes to mind when attempting to describe Download 2008, the all-day event on the Universal Studios lot nevertheless stood out within the quickly growing trend of big-billed shows across the country, as because it remained wisely undefined by any particular musical style or genre.

The Duke Spirit, for instance, revived ’60s garage rock during their set, while the Jesus and Mary Chain reprised their ’80s guitar-feedback take on vintage ’60s sounds with a noisy late evening appearance. And speaking of the ’80s, Norway’s Datarock found time to teach the audience how to do the Running Man, whereas Ghostland Observatory frontman Aaron Behrens came off like a mad man who was under the spell of powerfully propulsive dance music. Mates of State, who were occasionally assisted by a two-man string section, turned in the day’s best performance. Even when working without the extra accompaniment, the keyboard/drummer, male/female, husband/wife duo somehow built surprisingly full-bodied, melodic walls of sound.

A rotating main stage kept things hopping, with an average of only about five minutes lag time between acts. But to fill up Download downtime, on-site festival sponsors offered plenty of good swag, including Volkswagen T-shirts in multiple designs and colors, and the Nowwhat.com booth, where photographers took specialized photos that magically transformed regular folks into rock stars.

At a time when cloning experts have seemingly set their sights on replicating Coachella in every U.S. city with a large, unused land mass, Download 2008 stood out distinctly as a weird and wonderful entry into an increasingly crowded field.

Check out photos from Download 2008 in Los Angeles after the jump!

Jon King from Gang of Four / Photo by Jess Lee

More photos from Download 2008 in Los Angeles after the jump!