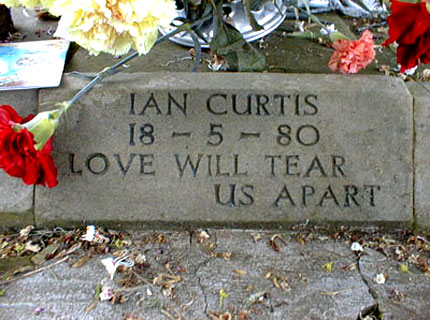 The stone, which bears the inscriptions “Ian Curtis 18 – 5 – 80″ and “Love Will Tear Us Apart” — the latter of course referencing the band’s ubiquitous hit — was reportedly stolen between Tuesday (July 1) afternoon and Wednesday (July 2) morning. Currently, authorities have no leads in the case.

While seemingly an act of reverence, the recent spree of grave robbing does raise a sense of alarm as to which deceased musicians’ gravesites are at risk and demand bolstered security.

1. Sid Vicious, 1957-1979
Cause of Death: Heroin overdose
Final Resting Place: Vicious’ ashes were allegedly spread over feral girlfriend Nancy Spungen’s Philadelphia gravesite.
Reason to Worry: Eager fans might be hoping pieces of the original tapes from his atrocious “My Way” video are scattered through his dusty bone chips.

2. Jimi Hendrix, 1942-1970
Cause of Death: Though details are hazy, Hendrix’s medical cause of death is attributed to affixation on his own vomit.
Final Resting Place: Renton, WA
Reason to Worry: Hendrix better be careful, because after rumors of his mammoth schlong started spreading (mostly thanks to Cynthia Plaster Caster), many a former groupie might be trying for one last stab at his axe.

3. Wendy O. Williams, 1949-1998
Cause of Death: Self-inflicted gunshot wound
Final Resting Place: Cremated ashes; location unknown
Reason to Worry: Wendy should feel fortunate the whereabouts of her remnants are unclear, because she’d have cause for concern on dual-gendered fronts: Some sleazoid ex-Lower East Side junkie could try to cop one last feel, while all her female followers could try and snag a piece of her storied punk-dominatrix outfitting.

5. Elliott Smith, 1969-2003
Cause of Death: Stab wounds to the chest
Final Resting Place: Whereabouts Unknown
Reason to Worry: Online fans rage on about his remains’ location, some speculating and even searching for their resting place — but fortunately for the sanctity of the late, great songwriter, it’s like searching for a needle in the hay.

7. The Replacements’ Bob Stinson, 1959-1995
Cause of Death: Longstanding drug abuse, bodily failure
Final Resting Place: Minneapolis, MN
Reason to Worry: The Replacements’ fans are certainly amongst the most dedicated, but one would hope they could just Let it Be.