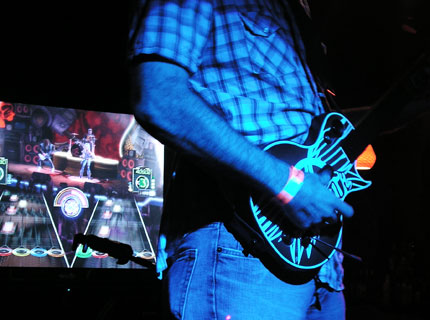 A mix of Guitar Hero fanatics and adventurous newbies battled it out for dominance and supreme bragging rights when the Guitar Hero: Aerosmith ROCKS the Hard Rock contest-sponsored by SPIN and the Hard Rock Café-stopped at downtown Atlanta’s Hard Rock last night (July 23).

As Steven Tyler’s wardrobe from the “Walk This Way” flanked the festivities, 18 faux-axe-slingers gave it their all in a fight for the rock ‘n’ roll chance of a lifetime. The four highest-scoring winners from the entire tour will win the chance to meet the band in Boston and duke it out on Aug. 25 for the grand prize: a chance to speed away on Tyler’s custom designed Guitar Hero: Aerosmith/Hard Rock Café/Red Wing motorcycle.

Although the performances lacked both the epic nature of the US Air Guitar Championships and screeching hilarity of a karaoke night out, all contestants proved their prowess of the pseudo guitar, rocking out the expert level, in most cases, to near perfection.

Slaying his first-ever competition, 29-year-old Johnathan Justice of Atlanta took home an autographed Steven Tyler guitar-controller, that is-along with a good bit of swag. When asked if he came to the competition thinking he’d walk away a champion, he had a simple answer: “I thought I’d do alright. My friends dragged me into it.” Lets hope his friends get a chunk of the spoils, too.Check out more pictures from last night


The young challenger on the right clearly isn’t afraid to get up close and personal with the game. / Photo by Damon Sgrignoli


The gentleman on the right is befuddled by his opponent’s mastery. / Photo by Damon Sgrignoli

Natalie B. David
Tags: Guitar Hero Tour, We Were There