With the indie world a-buzz over Feist's impending appearance on the legendary kids show, it got us thinking about some of the series' more awkward musical-guest appearances. 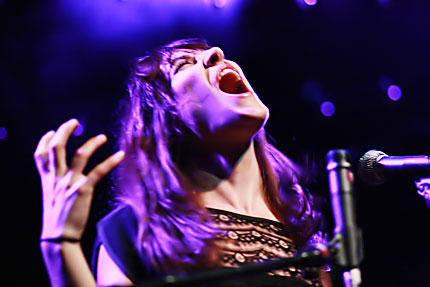 Pardon the jaded adult inside us (especially because he’s hungry and hasn’t napped in a while), but generally, the paradox of pop stars reworking their adult-themed lyrics for Sesame Street’s preternaturally peppy musical performances comes off a tad creepy to anyone over 13 months. Of course, a built-in bias leads us to be relatively less appalled by Feist’s reworking of “1234” (which has been adjusted to wax poetic about “monsters walking across the floor”) in a segment set to air on Aug. 11.

Fortunately, there remain enough clear-cut examples of disturbing interactions between musicians and elementarily educated Muppets to poke fun at while leaving Leslie out of the muck. And if the underlying throughline connecting guest spots by the likes of R.E.M., *NSync, and Hootie and the Blowfish could be summarized in one phrase, it would probably be: Kids, don’t talk to strangers.

Read on for our list of the five most supremely slack-jawing Sesame singalongs:

1. R.E.M.
A few dudes playing music in some amorphous outdoor landscape, helped along by furry, brightly colorful “furry happy monsters feeling glad,” before suddenly, “something has gone wrooooong, faces have turned loooong” and there’s nothing but “cryyyyying,” as the Muppets begin to dramatically “sob and whine.” Until Michael Stipe reminds everyone, “C’mon monsters, you don’t have to cry, we can be happy,” before bobbing and flapping with an unfettered glee that feels entirely too instinctual. Basically, it’s the trajectory of an acid trip condensed into three-plus terrifying minutes, and is eerily more kindred to this classic Mr. Show clip than appropriate for children.

2. Billy Joel and Marlee Matlin
In this fantastically fucked clip, Joel serenades Oscar the Grouch with “Just the Way You Are” as deaf celeb of the moment Matlin sign-interprets the tune beside his garbage can. The whole scene is presumably intended to serve as an uneasy metaphor for acceptance of people’s differences, whether they were born with an involuntary hearing impairment or, ya know, choose to live in filth. Outside of maybe Lionel Richie’s “Hello” video, the world had never seen such a pandering musical paean to physical disability.

3. ‘NSync
While a hearty honorable mention goes to their peers in the Backstreet Boys, the sight of Lance Bass badgering Bert and Ernie ever so gently to simply “believe in yourself” is just simmering with subtext too good to pass over. But getting a blast from Justin Timberlake’s post-pubescent, pre-street-cred past — donning a hat he presumably stole from the set of I Still Know What You Did Last Summer while snapping along with his cohorts as if they were a self-help barbershop quartet — is tickle-me-queasy priceless.

4. Hootie and the Blowfish
Offering “a little hand from a grown up friend” seems less a gesture indicative of Sesame Street’s guiding principles than an invitation to be kidnapped and taken across the street to Barney’s playhouse. The most perverse aspect of Hootie and his Blowfish’s reworked “Hold My Hand” is that it’s drastically less noxious as a PSA about conscientious street crossing. Of course, when one of the Muppets squeaks, “That feels good” after being offered one of the Blowfish’s big, strong man hands, and then unintelligibly moans with delight, the purple-people-eating man claws of Barney’s warm embrace suddenly seem like safer hospice.

5. James Taylor
Maybe it’s the moustache that gives this a calamitous cringeworthiness. Maybe it’s the storied tales of Taylor’s drug abuse and suicidal tendencies during the ’70s. No, it’s probably the group of small children screaming, “Jelly Kelly come” with uniquely fervent delight as the “Fire and Rain”-man plucks his guitar and no doubt thinks to himself, “Enjoy your inability to project discomforting euphemisms onto harmless kids’ tunes now, because in 20 years you’ll be making love to a tourniquet and calling monsters much less innocuous than Mr.Snuffleupagus your best friend.”