SPIN.com takes an advanced listen to the beloved psych-revivalists' latest opus, 4, and offers some early thoughts. 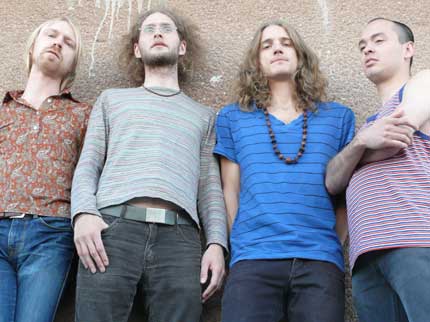 Sometimes it takes an artist several albums and as many years to truly find their voice. Of course, whether they’re provided with that room to grow by today’s love ‘em and leave ‘em critical mass and crippled music industry is another story. But alas, like fellow overseas mood-masters Sigur Rós, Swedish psych-folkers Dungen have hit a masterful stride nearly a decade on in their career.

September 30 sees the release of 4, their fourth studio LP and second for Kemado. And rest assured, it’s a doozy of disparate sounds and divergences from their expected pastiche of power soloing and gentle flower-power vibes.

Band leader Gustav Ejstes dropped that hero to get with the zero, or at least his guitar to romance the piano, his new instrument of choice. And the result is an effort more focused on nuance, texture and rhythm than the band has ever produced. Not that they skim on the solos, thanks to the always-stellar contributions of guitarist Reine Fiske.

But since all you adoring fans will have to wait in silenced suffering for two-plus months to get an earful of 4, we’ve decided to tease you with two goodies: a new, as-yet-unseen shot of the boys (above) and a list of five prevailing thoughts that emerged from our recent sneak preview of the record. And keep checking back into SPIN.com, because as a further treat, Ejstes himself will be responding in the coming days with his suggestions of what listeners should keep their lobes lubricated for. Or 4, as the case may be:

Read our five thoughts about the new album after the jump >>

1. Put a bit of English on it
Even the aforementioned Sigur Rós have warmed up to a bit of English on their records, but that darn Ejstes is stuck in his foreign-language ways (album title aside). C’mon buddy, show some love to your lazy, ethnocentric stateside audiences and put your heartwarming lyrics in occasional words we can understand.

2. The piano man
Man, his publicity folks weren’t kidding when they highlighted Ejstes’ deference toward the keys on 4. It’s not like he’s suddenly Billy Joel, but songs like “Finns Det Någon Möjlighet” have a damn-near Mott the Hoople-worthy jaunt.

3. What’s up, shorty?
Not that the album is without its tangential episodes, but there’s some relatively terse material here. Hell, six of the track are a tidy sub-four minutes (there seems to be a theme happening around the number four here… have they been hanging with the Verve?). What’s next? A tour with Melt Banana?

4. Just another brick in the wall of sound
Ejstes has finally, fully tapped into his inner hip-hop producer. Songs like “Fredag” eschew the trappings of brevity by creating a multi-dimensional experience that feels baroque, beautiful, brooding and bouncy all at once. If only actual hip-hop knob-twiddlers like the RZA showed such focus in their most recent projects.

5. Am I evil?
Maybe Ejstes has been diggin’ some Black Mountain of late, but the bottom-end of his songs are getting noticeably meatier, particularly on tracks like “Mina Damer och Fasaner,” which sounds less like the psychedelic ’60s of Haight-Ashbury than the doom and gloom of Black Sabbath’s Birmingham. Hey, at least it’s not skewing closer to Alabama’s Birmingham.