In this intimate sit-down, DJ/producer A-Trak talks about getting your blood pumping with the fourth installment of the Nike+ Original Run series. 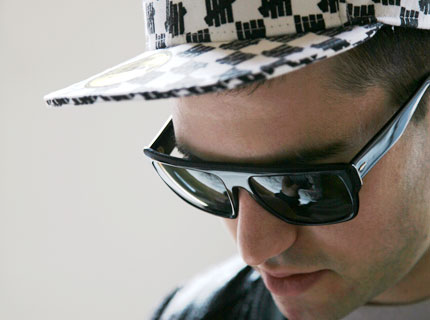 Toning your summer beach bod just got a lot more danceable, thanks to the fresh partnership between DJ A-Trak and a certain global sneaker giant. The Nike+ Original Run franchise has welcomed a new 45-minute composition, Running Man, from the Montreal turntablist, out now through iTunes.

A-Trak joins LCD Soundsystem, Aesop Rock, and the Crystal Method as alum of the Original Run catalog. His synth-based mix saga skitters between electro and hip-hop, hitting peaks, valleys, strides, and sprints for the entirety of a cardio workout, including a bubbling intro for warm-ups and a simmering denouement for cool-down.

In the exclusive chat below, A-Trak welcomes us into his studio to see where the proverbial magic happens, beaming with pride as he puns his way through the record’s “running themes.” Admitting he’s no Jesse Owens, A-Trak parallels the “pacing” it takes to run with his style of mixing and sequencing. Running Man was “about letting certain elements of the track seep in and flow gradually,” he explains, instead of the obviousness of a club record, but let’s see you try to keep your feet still once the beat hits.