Canadian alt-folkers craft a clip worthy of their last video, a cover of Justin Timberlake's "SexyBack." 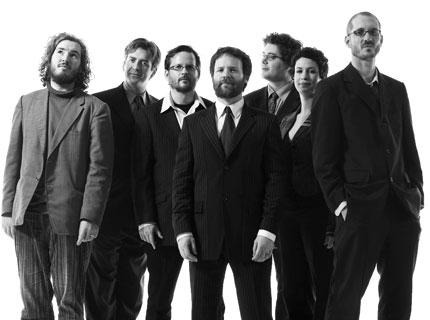 Toronto’s literary-minded, alt-folk-country collective Rock Plaza Central have worked hard to become buzzworthy. They emerged from self-released purgatory two years ago to a rapid buzz-swell and eventual signing with Yep Roc Records in 2007, who reissued Are We Not Horses to further acclaim. And after a viral-video smash with their cover of Justin Timberlake’s “SexyBack” and recent tour dates with the Mountain Goats, they decided to cement the seriousness of their mission with a glossy, conceptual clip for their beloved single, “I am an Excellent Steel Horse.”

The clip was directed by Mike Juneau and produced by Jesse Ewles and can be viewed, for the first time anywhere, here:

I’d seen a video Mike [Juneau] did when he was in school called The Last Man or something,” frontman Chris Eaton tells Spin.com. “[It] was supposed to be the idea that, in the future, once the robots take over, they have a museum with a man in it. But they don’t have a real man, just this crazy contraption made of television sets that approximate what they remember a man to be… And I remember thinking how this fit with our vision of robotic horses — as close as possible to a real horse while still being creepy and mechanical.

As for the composite images put together in the clip to turn Eaton and the band members into televised equestrian minotaurs, the singer/guitarist says, “We also wanted the video to represent the multi-personality disorder/order of the band, as the song is as much about us being comfortable calling ourselves a real band as it is about robot horses.”

RPC plans to hit the studio in two weeks, according to Eaton, who also adds that “at the time of this interview, lyrics have been influenced mostly by Faulkner.”