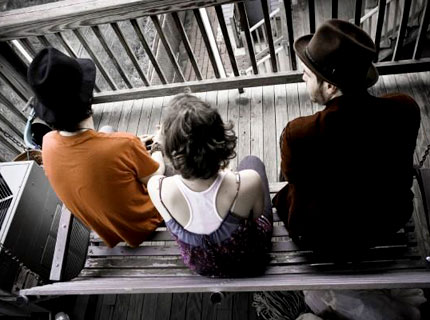 For those who are disappointed that they haven’t received any musical mail from the Postal Service recently, Pretty Good Dance Moves are here to silence your longing. The somewhat-modestly-named lap-pop trio is preparing to self-release their debut, self-titled EP on July 17. With that imminent release comes the below video for the swirling, dreamy “Demons Dancing,” starring Flight of the Conchords’ delightfully awkward Kristen Schaal, whom PGDM frontman Jimmy Giannopoulos tells us”is super cool,” and that,”The day of the video shoot it was about 100 degrees outside and she didn’t even flinch. She is a true artist and actor, the kind of person you wantaround.”

In the clip, Schaal stands amidst a dreary cityscape – that is, until a mysterious bicycle-bound stranger arrives to (literally) clear the skies. Together, our lonely heroine and the jean-jacketed jester let their freak flags fly in a friendly dance-off, as the chorus coos, “Come on and dance with me / We’ll shed our demons dancing.””What I had in mind was shooting a run down version of Michael Jackson’s ‘The Way You Make Me Feel,'” says Giannopoulos. “The guy wants the girl and she pays him no mind, but in then end he wins her over with the dance!” Alas, as the tune’s last strains depart, so does the bicycle-dancer, but not before Schaal lets him know that he has, of course, “pretty good dance moves.” A word of advice, Kristin: Don’t sell your own moves short.