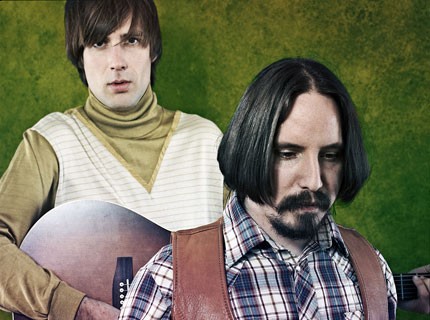 Moonlighting gigs have seemingly become the central preoccupation of many of today’s more relevant indie artists, and the inhabitants of Islands are no exception, despite the recent release of that group’s excellent Arm’s Way. Nick Thorburn and sometime Island resident Jim Guthrie (a reputed lo-fi lothario on his own solo time) are set to release their Aug. 19 debut (though Suicide Squeeze) as Human Highway, aptly titled Moody Motorcycle. For a free, premiere download of “Sleep Talking” off that very release, look no further than this very Web page.

The duo’s purported intent was to harken back to the days of heavenly melodies, like those of the Everly Brothers and other blue-eyed soul/doo-wop-era vocal groups. And on the cleverly titled “Sleep Talking,” Thorburn and Guthrie succeed — in a knowingly rough-around-the-edges kind of way. Think of the snippet as falling somewhere between their harmonic aspirations and the AM radio-filtered quirk that permeates much of Shudder to Think’s First Love, Last Rites soundtrack. Or, just listen and decide for yourself.