Check out this behind-the-scenes clip from the Ohio natives, filmed by the band themselves, as they hit the road last week with Linkin Park's Projekt Revolution tour. 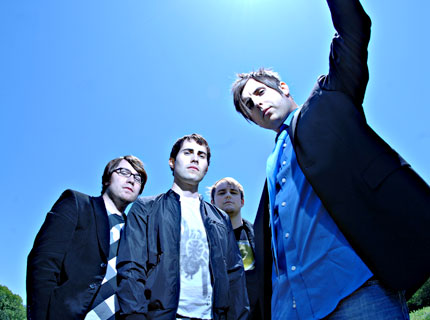 Dayton, OH’s emo sons, Hawthorne Heights, are back and wiser for the wear, and set off last week on a nationwide march with the Projekt Revolution tour, which also features Linkin Park, Chris Cornell, and the Bravery. And to commemorate their journey, the group filmed backstage and behind-the-scenes footage of themselves during their July 18 stop in Pittsburgh, PA, exclusively for SPIN.com (where you can also exclusively stream new album cut “Rescue Me” on Monday, July 28, as part of the band’s upcoming Artist of the Day feature).

With a tough two years under their belt — including the tragic death of guitarist Casey Calvert and well-publicized label woes — the band have a lot to maintain their spirits, namely a new album, Fragile Future, due Aug. 8.

As for the clip itself, despite the band having exploded from MySpace phenom to Billboard success, they evidently haven’t indulged in total rock-star extravagance. So while it’s not quite This is Spinal Tap, Hawthorne’s endearingly intimate submission can be seen below, exposing the guys in their natural habitat: signing autographs, relaxing on the tour bus, and even exposing top secret alter-egos.