Coheed and Cambria to Play All Four Concept Albums Live

With shows in New York City and Los Angeles, the prog/emo juggernauts will perform the quartet of LPs comprising The Amory Wars series. 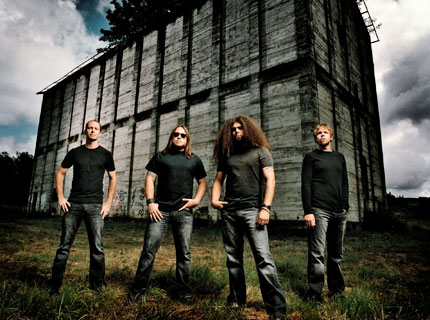 As if basing an entire discography around a complex fantasy plot wasn’t epic enough, sci-fi rockers Coheed and Cambria have detailed plans to perform their entire concept album oeuvre — referred to as The Amory Wars — in a pair of events in New York and Los Angeles, dubbed Neverender.

In chronological order over four days — Oct. 22-25 at New York’s Terminal 5 and Nov. 5-8 at Los Angeles’ Avalon — the four-piece will shred through 2002’s The Second Stage Turbine Blade, 2003’s In Keeping Secrets of Silent Earth: 3, 2005’s Good Apollo, I’m Burning Star IV, Volume One: From Fear Through the Eyes of Madness, and last year’s No World for Tomorrow.

And according to frontman Claudio Sanchez, the event provides a golden opportunity not only for the fans, but also for Coheed’s creative process: “Interestingly enough, us going over all the old material seems to be influencing our writing of the next record, which we’re sort of doing simultaneously,” he said in a statement. “And to me, that seems apropos since the next story is the prequel to The Amory Wars.” As long as it’s nothing like Star Wars: Episode I — The Phantom Menace, fans just may love it.