Morbid emo stalwarts raise the dead yet again with their sixth full-length and major label debut, Agony & Irony, out today. 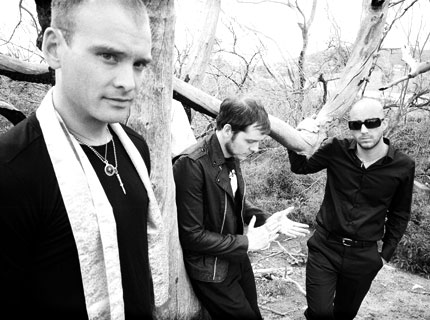 What? Over the last decade, Chicago’s death-obsessed emo outfit Alkaline Trio have progressed from a youthful, angst-powered outfit churning gruff-throated shouters to a slightly — dare we say! — matured act embodying a slicker songwriting methodology and sound. And the band’s latest effort, Agony & Irony, out today (July 1), marks their debut on Epic Records and finds the Trio continuing to refine their Cure-meets-Hot Water Music sonic, as illustrated with the glossy “Over and Out,” while still appropriately rocking out on tracks like “In Vein.”

Now Hear This: “In Vein”