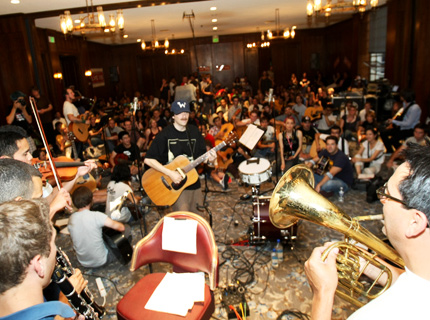 Just as frontman Rivers Cuomo hinted in Spin’s June cover story, Weezer have embarked on their “Hootenanny Tour,” a series of nationwide stops during which devout, guitar-giftedfans — chosen via YouTube tryouts — rock out live with Weezer, strumming out both band originals and covers with their garage-and-power-pop heroes.

And last Friday (June 20), after stops in Phoenix and Portland earlier this month, the band — minus drummer Patrick Wilson, who’s nursing a knee injury — played with 90 YouTube users in a defunct Naval Air base where bassist Scott Shriner, a former Marine, was once stationed.

Check out video footage of Shriner leading fans through Radiohead’s hit “Creep,” which he dedicated to Major Donovan, his onetime superior officer, before handing the limelight over to Cuomo for a version of “Beverly Hills,” his bushy mustache and hiked-up tube socks delivering a decidedly Weezer dorkiness to the onetime military stronghold.