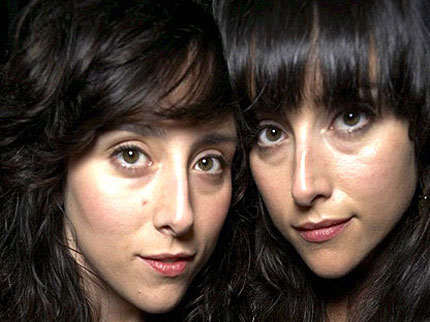 What? With echoing acoustic guitars and gorgeous harmonies, it’s understandable that Los Angeles, CA’s the Watson Twins are occasionally tagged as a country act. However, identical twin sisters Chandra and Leigh Watson prove that genres are only skin deep on their debut LP, Fire Songs, out this week on Vanguard. The vocal melody on “How Am I to Be” sways and swaggers like a Rumours-era Fleetwood Mac gem, while “Sky Open Up” recalls Neil Young’s stark heartbreak as much as it does the Carter Family’s strumming meat and potatoes country.

Who? Born and raised in Louisville, KY, the Watsons moved to California in the ’90s, where they began writing their own music and performing with local musicians. The Twins collaborated with Rilo Kiley siren Jenny Lewis on her 2006 solo debut, Rabbit Fur Coat, while also self-releasing their first EP, Southern Manners. Fire Songs was recorded in September of 2007 in L.A.

Fun Fact:The Watson Twins have added their sweetly-sung voices to a number of covers, including a version of Neil Young’s “Powderfinger,” as featured on Cinnamon Girl: Women Artists Cover Neil Young for Charity, as well as a rendition of the Cure’s “Just Like Heaven,” which appears on Fire Songs.

Now Hear This: The Watson Twins, “Sky Open Up”