Philadelphia sons get strung out and strummy on their debut full-length, Wagonwheel Blues, out today (June 17). 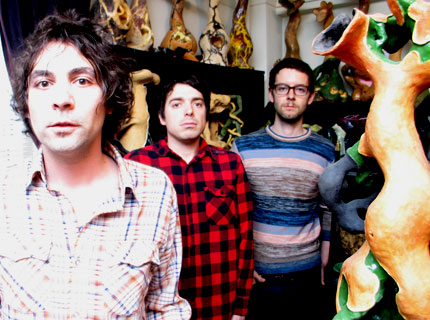 What? With the sublime brand of drone-soaked country exhibited on the band’s debut full-length, Wagonwheel Blues, it’s easy to assume Philadelphia-based outfit the War on Drugs aren’t exactly fending off any chemical influences. The quintet offer catchy tunes marked with ambient surroundings that would sound at home on an Animal Collective record, and also call to mind the organized chaos (not to mention organs) of the Arcade Fire. For a taste check out “Taking the Farm,” featuring frontman Adam Granduciel’s hyper-melodic singing style and guitar-streaked skies.

Who? The War on Drugs were birthed from informal sessions between Granduciel and guitarist Kurt Vile. Soon, percussionists Kyle Lloyd and Charlie Hall, and bassist Dave Hartley joined to complete the full lineup. Indie label Secretly Canadian signed the outfit in March of 2008, offering 2006’s demo-laden Barrel of Batteries EP as a free download (which is still available via Secretly Canadian’s website) while the band prepped Wagonwheel Blues.

Fun Fact: To help fund his musical interests, Granduciel works for a rental property company in Philadelphia doing maintenance work, including cleaning out apartments after tenants move. Amongst the numerous odd things he’s found in vacant apartments, Granduciel discovered an old drum kit and an amplifier, both of which were used in the recording of Wagonwheel Blues.