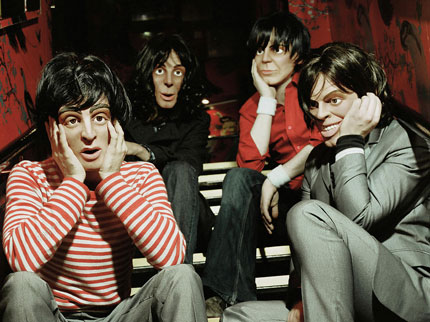 What? Three years after releasing their terrific set Road to Rouen, quintessential Brit rockers Supergrass return June 10 with Diamond Hoo Ha, proving that the right combination of energy, humor, and perfectly-crafted hooks never gets old. As the band’s sixth studio full-length, the new album mixes five decades of Britpop stylings into its consistently tight and exuberant rock; from psychedelic Beatles-esque harmonies, to Roxy Music spun-out sax solos, to the classic Buzzcocks-inspired pop-and-sneer we know and love.

Who? Oxford-bred pals Gaz Coombes (vocals/guitar), Danny Goffey (drums), and Mickey Quinn (bass) have been playing together since 1993, releasing their debut album, I Should Coco, in 1995. Gaz’s older brother and longtime Supergrass collaborator Rob Coombes (keys) was officially incorporated in 2002, rounding out the quartet. Finding themselves situated on the far side of the Britpop bell curve (debuting a few years after Pulp, Suede, Blur, et al.), they surfed into the new millennium with energy intact, and never looked back.

Fun Fact: In 1995 (when Gaz was only 19 years old) Supergrass were approached by director Steven Spielberg, who had been struck by the band’s video for “Alright.” Spielberg wanted to turn the band’s short history into a TV show, reportedly in the style of The Monkees. Supergrass turned the idea down, deciding instead to concentrate on songwriting.