The Police to Play Final Reunion Show in NYC Aug. 7

The '80s punk-meets-reggae legends plot their last reunion gig, which will act as the largest-ever fundraiser for public television. 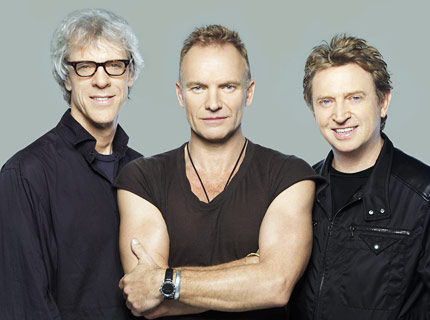 You don’t have to wear that dress tonight. Instead, save it for Aug. 7, when the Police will play the final show of their large-scale reunion tour at Madison Square Garden.

Don’t start lining up in front of the Garden just yet, however. Tickets to the show, which will feature seminal Atlanta, GA-born post-punks the B-52s as the opening act, will only be available June 14 through a pledged donation to local public television outlets Thirteen/WNET and WLIW21. Tickets will be rewarded to $750, $500, $350, and $150 donation levels. Check your bank account balance and snatch up those tickets — it’s for a great cause.

Sting’s November 1987 Nothing Like the Sun Cover Story: Invisible Son