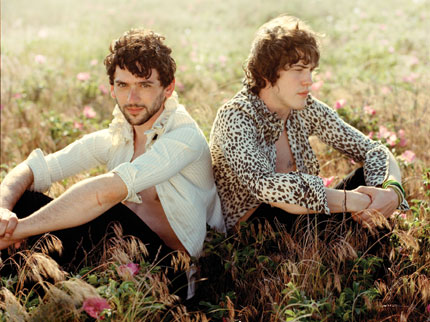 As purveyors of the freaky electro-psychedelia found on the band’s acclaimed debut Oracular Spectacular, MGMT’s Ben Goldwasser and Andrew Vanwyngarden invite you to drink the Kool-Aid once again in the new music video for album track “Electric Feel.” Beware, this rabbit hole goes deep!

Capturing a hedonistic, freak-out fiesta set in the “Amazon,” the video calls to mind some sort of Lord of the Rings meets The Matrix Reloaded visuals — that is until an animatronic band of jungle animals appear and shimmy down as Goldwasser, Vanwyngarden, plus throngs of others dance along. And before you know it, the moon’s harpooned and sliced open, glowing liquid is applied to dancers like holy communion, and the duo are riding through space on motorcycles. You’ve got to see it to believe it.