Tennessee-bred brothers (and one cousin) gear up to return with fourth full-length album to date, entitled Only By the Night. 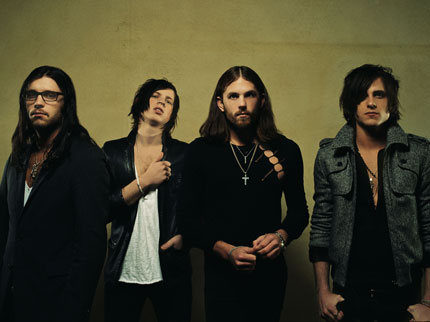 Southern rockers Kings of Leon have announced the release of Only By the Night, the quartet’s much-anticipated follow up to 2007’s Because of the Times, set to drop stateside Sept. 23 via RCA Records.

The new set was recorded in the band’s own backyard, at Nashville, TN’s Blackbird Studios, and features production work from longtime collaborators and famed producers/mixers Angelo Petraglia and Jacquire King, as well as the Kings of Leon themselves.

The quartet — Followill brothers Caleb (lead vocals/rhythm guitar), Nathan (drums), and Jared (bass), plus cousin Matthew Followill (lead guitar) — recently wrapped an East Coast jaunt opening for Pearl Jam, and will cross the Atlantic for a string of European dates this summer. The outfit’s next U.S. appearance will be Aug. 9 at New Jersey’s All Points West Festival at Liberty State Park.