Respected underground hip-hop queen gears up for her breakthrough moment with the release of excellent new solo set, Jeanius, out July 8. 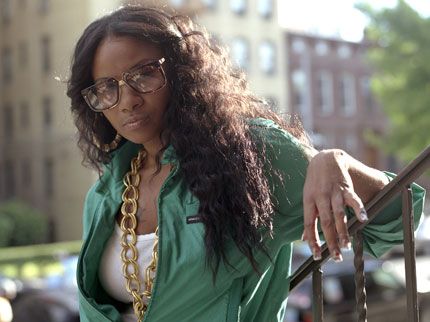 What? After toiling in obscurity for nearly a decade, indie hip-hop B-girl Jean Grae is ready for her close-up with Jeanius, her long-delayed fourth full-length and fifth release overall, set to drop next week via Talib Kweli’s Blacksmith Records. With the help of beat wizard 9th Wonder on production duties, Grae creates her most accessible release to date; the MC’s unstoppable flow and packed cadences are combined with Wonder’s heavenly soul soundscapes, as on the stuttering, Wu-Tang-esque “#8″ and the ghostly “Love Thirst.”

Who? Born Tsidi Ibrahim in Cape Town, South Africa and raised in New York City,Grae began her hip-hop career in the little-known collective Natural Resource under the stage name What? What? After Natural Resource split in 1998, the rapper adopted her current moniker and released her solo debut, Attack of the Attacking Things, in 2002. Since signing with Blacksmith in 2005, Jeanius has been subjected to both unexpected delays and widespread Internet bootlegging leading up to its release.