‘Guitar Hero’ Gamers Rock Out with Aerosmith in NYC

Steven Tyler, Joe Perry, and the rest of the Boston boys joined Guitar Hero revelers in New York for the launch of their new game. 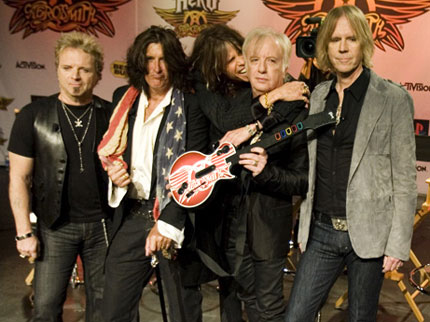 Velvet ropes sectioned off corners for wide-screen TVs and booming sound systems, and adoring fans of Aerosmith and Guitar Hero alike lined up to have their chance at rocking out like Joe Perry on jams like “Sweet Emotion” and “Walk This Way.” Further immortalizing the rock legends, the game follows the rock icons from their first gig at Nipmuc Regional High School to their induction in the Rock and Roll Hall of Fame in vivid, real-life graphics, down to the detail in Joe Perry’s Gibson Les Paul and Steven Tyler’s gaping mouth.

Preparing for “Guitar Hero: Aerosmith Rocks the Hard Rock” — a 16-date nationwide tournament sponsored by Spin seeking the best video Guitar Hero shredders, kicking off July 8 in Hollywood — fans were focused and locked in, so much so that when the real-life members of Aerosmith traipsed down the halls, few gamers peeled their eyes from the screens.

We asked Aerosmith themselves: If you could pick any band to follow in your footsteps, which would be the next one to undergo the Guitar Hero treatment?

Read the band’s answers >>
More photos from this event >>

We Asked: If you could pick any band to follow in your footsteps, which would be the next one to undergo the Guitar Hero treatment?

Back to the story >>
Read the band’s answers >>