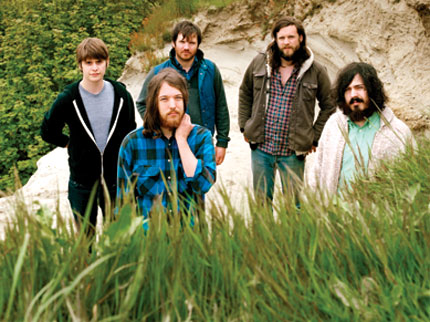 When they spotted a meteor crater in the Arizona desert recently, Seattle’sFleet Foxes did what you’d expect any self-respecting bunch of psychedelic folkie kids to do: They pulled over the van, hopped a barbed wire fence, and scrambled up to the rim of the pit. “It was insane,” frontman Robin Pecknold recalls before a show at Schubas in Chicago. “It was so quiet. You could stop walking and not hear a single sound.”

Anyone else might have mentioned the crater’s topography when describing its awesomeness, but for Pecknold, a fascination with silence makes sense. After all, silence cradles his voice in Fleet Foxes’ most compelling moments: Glowing, Zombies-meets–Woody Guthrie crooning opens the band’s Sun Giant EP and recurs throughout their self-titled debut album. “Some of my favorite Beach Boys stuff is a cappella,” says Pecknold, 22. “Just singing at home with my family is as rewarding as playing a cool show. My dad is a musician; music’s been in my family forever.”

That’s not to say Fleet Foxes’ five members form some sort of Gregorian choir. Most of the time, they harmonize amid guitar-mandolin-keyboard-drum arrangements — both jug-band rollicking and campfire spare. Even though Pecknold and middle-school friend Skye Skjelset founded the group less than two years ago, their reputation has built quickly. They signed with Sub Pop in January, dropped the critically adored Sun Giant in March, and soon recorded with Phil Ek, who has produced Modest Mouse, Built to Spill, and the Shins. Ek’s involvement might be the reason for the band’s distinctly post-2000 indie-rock sheen — sonically, Fleet Foxes resembles My Morning Jacket and, yes, the Shins — but a close listen reveals Pecknold aiming higher: The songs emerge in rounds, tell stories without choruses, and are organized in suites.

“Straight rock beats and choruses and verses aren’t really that interesting to us,” says Pecknold. “In the past, when I was writing music, I felt like if a song was ‘good,’ that’s all it needed to be. But I don’t want to believe that anymore. There are enough ‘good’ songs. I want to think it has to be more than that.”